The U.S. Postal Service (USPS) is failing to provide equitable mail delivery as its own statistics show pronounced geographic disparities in on-time delivery. This problem is long-standing but dramatically escalated during the pandemic when timeliness plunged nationwide. It is unclear why these geographic disparities exist and why they have been so persistent.

Inequitable service is contrary to USPS’s mission of providing universal postal service. The law states: “The United States Postal Service shall be operated as a basic and fundamental service provided to the people by the Government of the United States…. The Postal Service shall have as its basic function the obligation to provide postal services to bind the Nation together through the personal, educational, literary, and business correspondence of the people. It shall provide prompt, reliable, and efficient services to patrons in all areas and shall render postal services to all communities [emphasis added].”

USPS has fallen short of this mark. One case in point is the USPS “product” that consists of single-piece First-Class Mail letters and postcards. This is an iconic type of mail. It is how people conduct business, pay bills, and communicate with friends and family.

Over the past six years, while delivery standards established by USPS have remained unchanged, on-time delivery for this mail with a two-day standard ranged from an average of 96.4 percent in Oklahoma, the best-performing District, to 87.3 percent in Triboro (the New York City boroughs of Brooklyn, Queens, and Staten Island). The nine percent gap between Triboro and Oklahoma means important mail was more likely to be delivered late in Triboro.

Average three-to-five-day delivery scores ranged from 86.8 percent in Western Pennsylvania to 73.7 percent in Triboro. This is an even worse gap of 13 percent.

These and more detailed results are below and are available at https://postalpolicy.com/reports/. 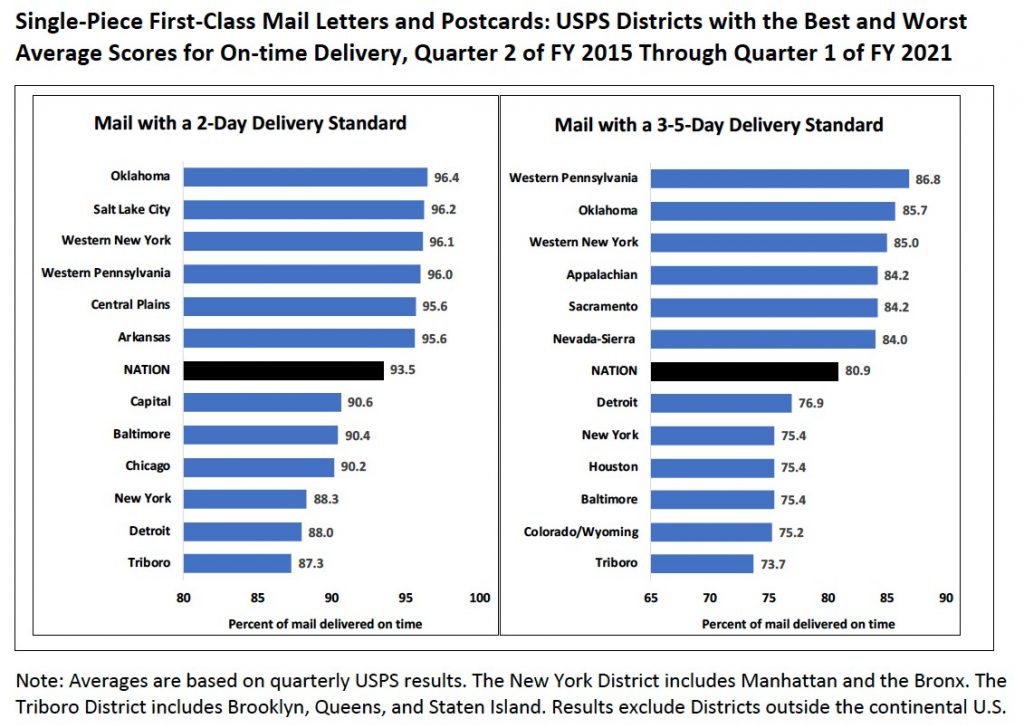 For First-Class Mail, disparities in timely delivery substantially widened in the last few months of 2020 and accelerated during December in seven geographic areas of the country (see the figure below). On-time delivery during the last week of December ranged from 47-48 percent in the Capital Metro and Eastern areas to 60 percent in the Northeast area to 82 percent in the Pacific area. 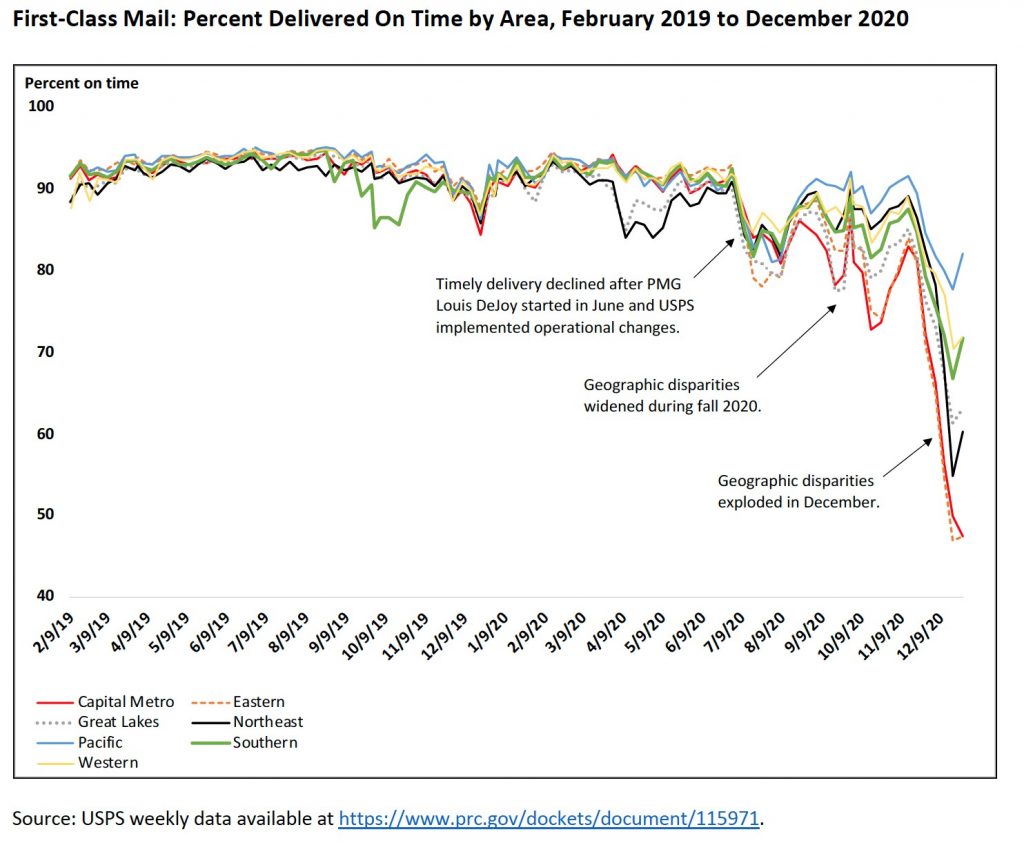 USPS has said the causes for the nationwide slowdown include USPS’s inadequate infrastructure, personnel shortages, unreliable transportation, poor operational practices, and a surge in package volume. However, it is fuzzy what factors make bottom-tier Districts so much worse than the best.

The Postmaster General and the leadership of postal unions and management associations recently formed a Joint Task Force on Service Performance to identify and address service issues at specific locations across the country. This appears to be a positive first step toward finally pinpointing the root causes of geographic disparities and fixing them.

The work of the Task Force needs to be accomplished with transparency and accountability. Reporting should be sufficiently detailed so that Congress, the Postal Regulatory Commission, and other postal stakeholders—most notably, under-served residents and businesses in Districts such as Baltimore, Capital, Chicago, Colorado/Wyoming, Detroit, Houston, and those in New York City—can monitor this situation and hopefully see progress being made soon.

Kenneth John is President of Postal Policy Associates. He also served at the U.S. Government Accountability Office, covering the U.S. Postal Service for more than 20 years as a Senior Analyst.