Read the report as a PDF here.

But while USPS put the longer target delivery target times in place on October 1, 2021, they now say they never intended for the 95 percent on-time delivery to be in effect on October 1, 2021. USPS’s prior words and actions, however, tell a different story, as documented below.

First, though, a review of the continued, systemic deterioration in first-class mail delivery times is in order.

During Fiscal Year 2021, USPS delivered 50.7 billion pieces of first-class mail. Under the new mail delivery standards that USPS uniformly was able to put into effect on October 1, 2021, 19 billion pieces of first-class mail can be delivered at least one day later throughout the year. This means legal documents, bill payments, sympathy cards, and other important business and personal documents will be delayed.

The slower official standards, as illustrated by The Washington Post, are below. 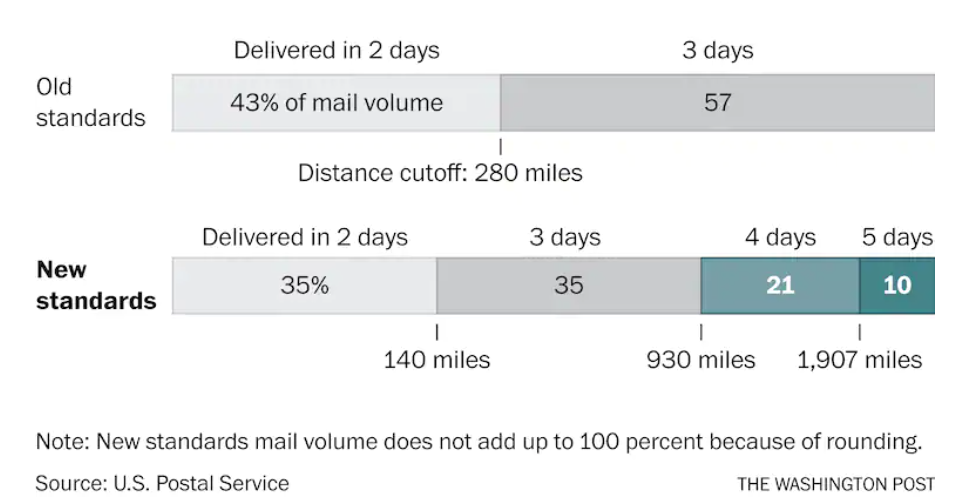 Through at least March 4, 2022, USPS has not met its new mail delivery standards in any week since they were implemented. This has been documented by Save the Post Office, a website run by Steve Hutkins, with thorough and excellent analyses on how USPS has failed to meet both its new and previous on-time delivery standards.

In March 2021, when discussion first began about revising first-class mail delivery standards, USPS was not meeting standards that were established in 2014. In fact, it failed to meet those standards, which it had lobbied for, for the past eight years.

Rather than offering a turnaround plan to improve mail delivery times in March 2021, USPS simply called for reducing the standards. Below is a summary of the key statements made and links to relevant documents.

March 23, 2021: USPS issues its ten-year strategic plan, Delivering for America. The plan repeatedly talks about the 2014 standards being unattainable and the importance of customers having predictable delivery times which will result from new, slower standards. At no point does the report indicate that it will take years to meet the new standards.

The language calling for the new standards includes the following.

“WHAT OUR BUSINESS CUSTOMERS SHOULD EXPECT: A strengthened postal infrastructure that delivers at least 95 percent of all mail and packages on-time, at all times of the year.” (p. 24, bold and capitals in original).

“By setting attainable standards, we will then hold ourselves to actually meeting those standards on a consistent, sustained basis, thereby ensuring that they establish meaningful customer service expectations.” (p. 52).

“Changing service standards will facilitate the move of First-Class Mail and First-Class Package Service to a more predictable and reliable network allowing us to achieve a consistent service level of 95 percent on-time delivery against the revised standards.” (p. 53).

April 21, 2021: Robert Cintron, Vice President for Logistics at the U.S. Postal Service provides written testimony to the Postal Regulatory Commission (PRC) about USPS’s proposed new delivery standards. He says, “We expect to set service performance targets at 95 percent once the new service standards are in place, and we expect to meet or exceed those service standards on a consistent basis.” (p. 35).

April 21, 2021: In USPS’s main legal filing with PRC on the revised service standards, it highlights Cintron’s testimony saying, “Overall, these changes will enable the Postal Service to provide the American people with more reliable and consistent service, through a more efficient network. As witness Cintron notes, the Postal Service intends to consistently meet or exceed service performance targets of 95 percent through implementation of this change, as well as other initiatives.” (p. 7).

May 14, 2021: In its annual report to Congress USPS says, “the Postal Service intends to set and achieve service performance targets of 95% across all product categories.” (p. 36).

July 20, 2021: The PRC issues its Advisory Opinion on USPS’s proposed service standard changes on first-class mail and periodicals. It warns that the new service standards are not realistic, in part because USPS has failed to do sufficient research.

The PRC is blunt in its concern. “Because the Postal Service has yet to monitor, evaluate, and assess these new service standards in the field, it should consider a 95 percent on-time target as aspirational, due to the highly dynamic factors involved in the postal mail network; the Postal Service should regularly update and publicly communication realistic targets throughout its implementation.” (p. 5).

The PRC also makes clear USPS has represented that the new standards will be met right away. “The Postal Service states that it ‘expect(s) to set service performance targets at 95 percent once the new service standards are in place, and…expect(s) to meet or exceed them consistently upon implementation of [its] proposed service standard changes during all times of the year.” (pp. 150-51).

September 2021: USPS issues a fact sheet about the new October 1, 2021 Service Standard Changes. At no point does it indicate that the new standards are not immediately going to be in effect.

November 10, 2021: A USPS news release with the prepared remarks of Postmaster General Louis DeJoy for the Postal Service Board of Governors meeting includes the following statement from the Postmaster General: “We will implement this standard change in the second quarter of this fiscal year and expect to reach our commitment of 95% on time performance in fiscal year 2023.”

March 15, 2022: In a filing with the PRC, USPS says, “However, the Postal Service intends to transition to 95% over several years as the infrastructure and network changes necessary to achieve this performance are implemented, rather than immediately implement unrealistic changes to that level that are not achievable absent other fundamental changes.”

Save the Post Office first identified and publicly shared this troubling information in the filing on March 15, 2022. They are to be commended for this excellent work.

Not only are the March 15 USPS remarks at odds with the letter and spirit of what is in the March 2021 Delivering for America Plan, they are at odds with what Postmaster General DeJoy said on November 10, 2021 and the numerous other USPS statements above.

Holding USPS Accountable for Its Misstatements and Related Actions

Clearly, USPS has been deceptive with these new, significantly lower standards. It still cannot, or will not, provide a date for when they will be met. Just as USPS never met lower mail standards that it requested in 2014, it will seemingly not be able to meet the lower standards that went into effect on October 1, 2021.

The American people, postal regulators, and Congress have the right to expect truthful, clear statements from USPS, especially when service is being reduced. The PRC, which can only issue an advisory opinion on USPS’s planned service changes, astutely anticipated they were unrealistic.

The U.S. Postal Service Board of Governors should not allow such poor practices and standards to go forward. It should halt any increase in first-class mail rates, pending a full explanation and clear plan for promptly meeting the October 1, 2021 standards along with a plan to meet the 2014 standards.

Congress should also request a thorough U.S. Governmental Accountability Office investigation into these matters. The sooner such an investigation is done, the better the American people will be served.

About the Author: Paul Steidler is a Senior Fellow with the Consumer Postal Council, an Arlington, Virginia organization that examines trends and best practices among postal services.